Once upon a time, there was a little girl who liked to sing. She liked singing so much that she did it everywhere she went – at home, at church, in the grocery store. She liked to stop by the flower shop on her way home from school or the weekend farmer’s market, and because she was an audacious child, she somehow managed to talk her way into an arrangement whereby she sang for the florists, and they gave her flowers. Nothing too expensive–mostly the flowers that had broken or been cut too short to fit into arrangements–but to her thinking, a good deal nonetheless.

Many years later, she graduated college and needed a part-time job to fill the summer before she left for Mongolia. Unsurprisingly, “I’m only here for the next three months, and also I want to volunteer at camp for a week in July,” was a bit of a hard sell, and most of the local places didn’t bother to call me back. And then, one fine day, I walked back into the flower shop and asked if they were hiring.

“Not really,” said the manager, “but I can take your name and number and call you if anything comes up.”

And then he took a closer look at me, and I watched a grin break across his face as he asked, “Are you the girl who used to come in and sing for us?”

“Mother’s Day is next week,” he said. “Want to start tomorrow?”

I spent that summer doing a lot of grunt work: processing and preparing flowers, schlepping stuff from point A to point B, making deliveries. And helping to set up weddings, which doesn’t really count as “grunt” work but almost always happens at odd weekend hours when the regular employees have absolutely no desire to come in. It wasn’t the most consistent or best-paying job out there, but it was fun and allowed me to work on my own terms, which was really all I could ask for at the time.

So when I had yet to find a degree-related job 2.5 months after returning to the US, I decided it was time to visit the flower shop again. Naturally, this decision coincided with the imminent arrival of Valentine’s Day; timing is everything when looking for a job, they say, and while I have no idea what factors might make me more less likely to land this internship or that full-time position, the busy season for flowers is pretty predictable.

Yes, I was told, they did need an extra pair of hand for Valentine’s Day, and how long had I been back in the country? Why hadn’t I come in earlier? 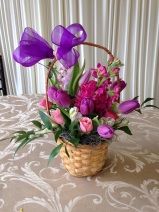 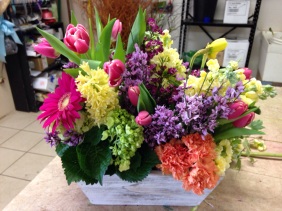 I made these things! I’ve taken a few steps up the ladder, from driver to rose stripper to underling designer. And that’s what I’ve been doing for the past three months instead of writing. Or rather, this is:

February 24: Valentine’s Day
March 31-April 4: Supposedly a slow week because of spring break, but in fact, parties and birthdays and mitzvahs up the wazoo and a phone that never stopped ringing.
April 14: Passover
April 20: Easter and Orthodox Easter
April 23: Administrative Professionals’ (*couch* Secretaries’ *cough*) Day
May 11: Mother’s Day
May 17: Prom

April was a busy month – we had at least one holiday or massive party every week, on top of our day-to-day business. And while May’s been much calmer so far, we’ve yet to get through prom.

So I should have a nice, Mongolia-related post out for your reading pleasure in the next week or so. In the meantime, I’ve got boutonnieres to make.